This week, I had an interesting conversation with a thoughtleader for an upcoming episode of my eponymous podcast. It got me thinking more than usual, as it somehow proved a point a lot of disruptors in Higher Education are trying to make for quite some time now:
Unfortunately education is still too often seen as an entity on its own. As something apart. It is understood as a silo linked to teachers that are teaching in a school or university and not much more. Logically, I am not challenging the idea that delivering lectures in a classroom may be a part of education. On the other hand, what I am distinctively refusing is its pure reduction to schools or universities!

During my aforementioned conversation I was congratulating my guest, a well respected fashion business expert and academic, for an award she has won for her commendable contribution to industry and commerce; a prize for bilaterally fostering mutual relationships and business in fashion. More than the award itself, my interest focused on its relation with Higher Education. Unfortunately, no actual connection had been highlighted. As it seems, education is oddly not in a chamber of commerce’s domain of interest!

We are all proudly sharing our university degrees, diplomas and certificates on LinkedIn, especially when we work in industry and commerce. Our personal story is filled with examples from campus and our network is more than often profoundly and intrinsically linked to our studies and our education (even decades after we have put a foot into an aula magna).
It is also true that we are idolizing college dropouts such as Steve Jobs, Zuckerberg or Kanye to nearly religious status. We appreciate, or at least admire, their unfinished formal education and link it somehow to their creativity or success.

This binary storytelling is based on a historical and therefore cultural way of understanding education or learning. A very simplistic approach that may have worked in an obsolete world of silos, a long time ago. A world in which we still opposed vocational training with academic education and in which academic titles were somehow seen as proof for seriousness and expertise… A world that despised college dropouts, were they to be just normal people, working as waiters or behind a cashier desk. A world that admired those same dropouts as anarchic geniuses of innovation, just because of their capacity to disrupt entire business sectors. The same sectors, the world has spent 7 years studying in university, to now be probably useless experts in…

also read  on living in uncertainty

Contemporary education is not only about theory, diplomas or expertise. Nor is it just about practice, vocation or making. Like a windmill everything is a cycle: commerce is education is commerce and so forth. Similar to a slightly crazy wannabe knight, in my small, naive and imagined world, everything I see, touch, smell and do could or should be called and understood as education. Whereas Don Quixote’s story was known for its central ethic that individuals could be right while parts of society were quite wrong, I too want and need to fight certain windmills…

Only question being, who wants to be my Sancho Panza?

This article is based on our newsletter “thoughts&coffee” published on 21.01.2022 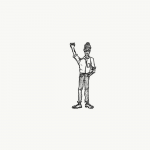